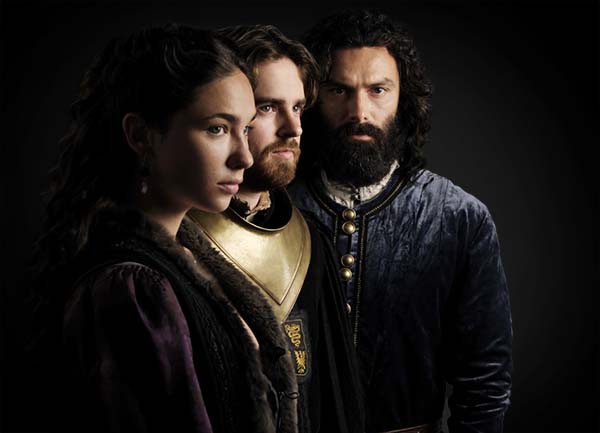 I was surprised, and honestly a bit disappointed, to notice that the original language is English.

To explain my disappointment, let me say that I am used to watching films and series in their original version (with subtitles), no matter the language, even if it’s completely different to mine (such as Japanese, Korean, Finnish…). In Europe, we’ve seen a lot of wonderful TV series from several countries (in particular the Nordic ones), and it’s been a real pleasure to be immersed in different cultures.

Coming back to Leonardo, I was expecting to hear Italian, as it was filmed in Italy, and obviously because of the story itself. Moreover, it seemed to me that the English language spoken sounds “modern.” Or at least, I didn’t find “history” in it, in period terms. I could be wrong, as a non-native English speaker, and of course, it would be hard to recreate and then understand (for the viewers) the spoken language from a few centuries ago.

So I was curious to know if you had discussions about the choice of the language for the series, and also about the nature of the words that would be used when English was chosen. Moreover, as it’s an international production, was the choice of the actors and their nationalities discussed at length?  Why is Leonardo da Vinci played by an English actor and not an Italian one?

I would be pleased to know more about those questions, and to learn your insights about the process of creating an international series and the problems it can bring for the writing and casting.

My best wishes for all your projects,

Isabelle, these are great questions and ones I get asked often, having produced not just Leonardo but three seasons of Medici, which also used an English-speaking cast to tell a story about Italian characters.

Like you, I often watch movies and TV series from other cultures in their original languages. I have no problem at all with subtitles, and love seeing and hearing actors perform in their native tongue.

For big international series like Leonardo, producers often decide that because of the scale of the project, they want to cast internationally known actors in order to reach as wide an audience as possible. It’s true that recent series like Lupin and Squid Game have proven that series no longer need to be shot in the English language to be giant hits.

I would be very happy to make a series in any language, and I do think we’re going to see non-English language series reaching ever-larger audiences, which is wonderful. But for a lot of producers, it’s still the case that certain series are more likely to get made if you shoot them in English. This is especially true for series that are commissioned by public broadcasters, who continue to dub series into local languages. As you know, the vast majority of French viewers will watch Leonardo in French, regardless of what language the actors spoke during production.

As for the style of language we used, you’re quite right that we did not try to recreate the way people spoke in the early 16th Century. Even if we were capable of writing such dialogue, I believe an archaic style would prove an obstacle to the audience we’re trying to reach. Instead we wrote in a style that is slightly more formal than modern speech, giving viewers a subtle sense of being in the past.

The more storytelling I have done about previous eras, the more I have understood that some dramatic license is always going to be necessary. People not only spoke differently in the 16th Century, they had a very different understanding of the world and themselves. As contemporary storytellers, we’re trying to interpret and “translate” that world to a modern audience. Leonardo does not pretend to be a documentary. But my hope is that at least some audiences will be inspired enough by the series to learn more about the real man and his times.